In response to The Daily Post’s writing prompt: “A Moment in Time.” 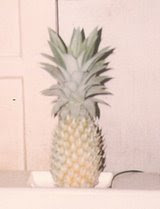 Once upon a time there was  a boy. A boy who dreamed. A boy who believed. He could do things. Whatever he wanted was upto him to do and accomplish. The efforts of the deeds solely rests on him. The results are for the workd to see. The boy was fond of pineapples. At his age he did not need to worry about the troubles of cutting the pineapple. His job was to carry it from the shop, give it to his mother. Get it cut, and eat happily.

Once it so happened that the pineapple was given in its complete form without cutting off the head. The head is the leaf of the pineapple plant that is thorny and pricks and bleeds the skin. People blamed that it was a futile effort. It will not grow. You will not get a Pineapple. It will die. These and other words of pessimism did not drive the boy away from his mission.

With lot of care it was brought home. The home for a new pineapple. The fruit was eaten and the head was separated to be planted. It did hurt his fingers when he handled it. There were tiny drops of blood when it was taken to be planted. It was planted even more carefully on the sandy soil that was leftover of a recent building repair work. For a long time the pineapple leaves grew. They grew in their innate amazing fashion. Water poured on the leaves would swirl around the centre and merge and drain towards the sides to the soil. The feed was regular, and growth was proportionate. Only, the pineapple fruit did not grow up yet. There is time for everything. And it was upto the boy to wait.

A time came when his uncle visited his home. He said ” The pineapple has to be covered or else the crows may have a try at it. The boy was amused. Was it the beginning. Will it be fruitful ? He noted that there was nothing to be shown as a beginning of fruit. The pineapple remained uncovered. When it rained, some adventurous snails climbed and crawled through the leaves. How it remained unhurt was puzzling for the boy. The rain drained its last drop. Days passed without events. At last, after a long wait, there was a fruit which could be called as home-grown.

The fruit was like any other pineapple. The shade somewhat lighter yellow. How sweet it could be? Has it grown to be a fruit ? Is it edible ? Can it be er.. harvested ? All this questions put the further actions and future of pineapple in question. His mother came to rescue. She proclaimed “The pineapple is ready, let’s take it”. And thence it was cut out of the plant. It was a memory of a lifetime. There needed to be a proof of its existence, before it is consumed. There was search for a photogenic location , a seat was righteously discovered and photo was taken. The boy was happy to show it as a proof to people who discouraged his mission. His liking to grow a pineapple at home. And here was the proof in the photo.

3 thoughts on “The story of the pineapple”

This site uses Akismet to reduce spam. Learn how your comment data is processed.

Ajeya: The Invincible's Crucible by Ajeya is licensed under a Creative Commons Attribution-Noncommercial-Share Alike 2.5 India License.
Based on a work at ajeya.wordpress.com.

Thank you for visiting The Invincible’s Crucible. To read more about the blog click here.